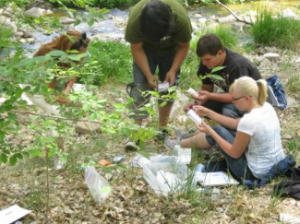 Here in the Gila Valley in southwestern New Mexico, the departure of the sandhill cranes marks the beginning of a new season. The cottonwoods and willows are beginning to break bud along the river, the mountain snows are melting, and the poppies are in bloom.

The Gila Conservation Education Center (GCEC) is busy coordinating year-end school events and, thanks to funding from a “More Kids in the Woods” grant, we’re beginning preparation of our 9th Annual Children’s Water Festival this September. This season of renewal is a reminder of how much GCEC continues to grow!

This small non-profit GCEC was established in 2004 with a mission to promote natural resource conservation through education, example and involvement. Situated near the Nations’ third largest National Forest and world’s first Wilderness Area, the GCEC maintains a strong collaborative relationship with the Gila National Forest and primarily serves the three rural counties encompassed by these 3.3 million acres of public land (Grant, Catron and Hidalgo).

Staffed by an Executive Director and one part-time staff person, the GCEC provides classroom visits, field trips, student-centered restoration projects, teacher workshops and local presentations In 2011, GCEC reached over 5,200 K-12 and adult learners through its programs. Considering that that the total tri-county population in this corner of New Mexico is just under 34,000, with a quarter of people under the age of 18 (US Census Bureau, 2010), GCEC programs demonstrate a broad reach! Thanks to our strong volunteer base, committed Board of Directors, hard-working staff, and numerous partners, GCEC continues to accomplish a lot on a shoe-string budget.

This year, we are beginning to transition from the traditional “teaching is telling” type of program to learning strategies that are student centered and inquiry-based. For example, through funding from New Mexico Department of Game and Fish, we’ve developed a pilot Biodiversity Project on The Nature Conservancy’s (TNC) Mimbres River Preserve. Fifth grade students from three schools and two school districts are participating in multiple inquiry-based activities both in the classroom and at the TNC preserve to learn about water, local biodiversity, and the differences between nature preserves and the National Forest system. Students are engaged in collecting real data and analyzing their results.

Like so many other non-profits who are working hard to promote a scientific and environmentally literate citizenry, we’ve experienced some growing pains as we move toward organizational sustainability. Yet, when we see the joy on a child’s face as she splashes in the river for the very first time, we know that our struggles are all worthwhile. Data collected from our 8th Annual Children’s Water Festival showed that more than one-third of participating students had never been to the Gila River prior to the Festival – a river located just 30 miles west of Silver City. Ouch!

Dr. Kathy Whiteman, PhD, is the Executive Director of the Gila Conservation Education Center and a member of the Board of Directors of EEANM.

This information was originally published in EE Connections for Spring 2012 [PDF].